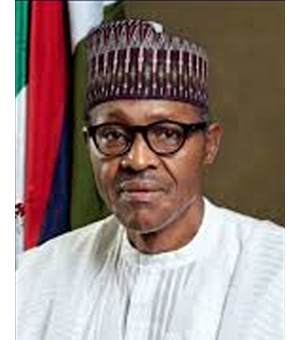 Muhammadu Buhari was born December 17, 1942 in Daura, Katsina State, Nigeria. He was Nigerian military leader and politician, who served as Head of state in 1984–85.

Educated largely in Katsina, Buhari took military training in Kaduna as well as in Great Britain, India, and the United States. He was appointed military governor of North Eastern state (now Borno) in 1975 and was later appointed federal commissioner for petroleum resources by Gen. Olusegun Obasanjo, who was the military head of state in 1976. By 1977 he became the military secretary at Supreme Military Headquarters, which was the seat of government. By September 1979 he returned to regular army duties and commanded a division based in Kaduna. His regime launched the “War Against Indiscipline,” a program which sought to promote positive values in Nigerian society. He was the executive chairman of the Petroleum (Special) Trust Fund from its inception in 1994, to its disbandment by the Obasanjo administration in 1999.

President Muhammadu Buhari was elected Nigerian president on March 28, 2015, through a democratic process adjudged to be one of the fairest in Nigeria political history. He is also a recipient of many national awards and medals including the Grand Commander of the order of the federal Republic GCFR. He is married with children and grandchildren.

President Buhari’s well known anti-corruption stance and drive to instill discipline in the society are widely perceived to be the most important areas his impact will be felt in Nigeria’s march to greatness.